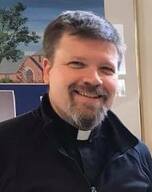 Pastor Michael C. Linderman
​Pastor Linderman grew up in Budd Lake, NJ, and graduated from Mt. Olive High School and St. Olaf College. He spent two years in Tanzania, East Africa, as an English teacher, and over two years in India as seminary intern and as a doctoral research student. He has graduate degrees from the Lutheran Seminary in Philadelphia and Harvard Divinity School, and a Ph.D. in South Asia Studies from the University of Pennsylvania.  His theological interests include comparative Hindu/Christian religions, interfaith studies and inter-religious dialogue, and Christian Theology of Religions. In his thinking, writing, preaching and teaching, he strives to be a faithful witness to an open and inclusive Christian theology of "being in the world."  His wife, Johann, is a professor in the Religious Studies Department at Georgian Court University, and they have two children, Mira and Sam. Pastor Linderman plays many musical instruments and enjoys leading contemporary worship at Redeemer and for the New Jersey Synod youth retreats as the pastor advisor to the Synod Youth Band. He teaches one course a semester as an adjunct professor in world religions and comparative religion at Seton Hall University. He enjoys playing music and following English soccer. Since both his wife and he share family connections to Pittsburgh, they are Steelers fans (sorry New York).
miklinderman@gmail.com
Kim Desmond - Office Manager
Although Kim grew up in locally, her travels took her far and wide before moving back to the area with her family in 2020.  Kim shares her time and home with her husband, their high school-aged daughter and middle school-aged son, and their large shepherd/lab mix aptly named Wiley.  She loves to travel and she and her family did extensive travel in Europe while living in Frankfurt, Germany for 4 years.
Before moving back to the area, Kim lived and worked in Bethesda, MD.  She worked as an office manager for an Episcopal church and continued to work remotely from NJ through much of the pandemic.  Kim earned her MBA in marketing from the University of Southern California.  Upon graduation, she moved to Boston to work as a financial analyst for Hood, a national dairy company.  Although Kim’s first career as an editor and director at CNBC and NBC Desktop seems a lifetime ago, she still enjoys the creative process of creating slideshows, online photo albums and videos.  She is excited to bring her business and multimedia skills to Redeemer.

Fran Morton - Director of Music
Fran is a conservatory trained organist and choral director.  She has held church music director assignments throughout the metro area.  Additionally she accompanies and conducts choral groups in major choral works in a variety of New York City and suburban venues.  Her music-related activities include creating special and seasonal programs for chorus and instruments, arranging familiar and original music as well as serving on and advising the Boards of music and arts organization.  She is a long-time resident of Montvale.
music@RedeemerRamsey.org